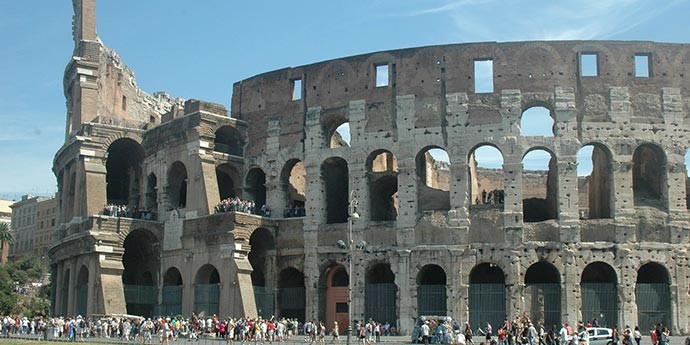 Rome really comes into its own between April and October, when the action spills outside and the centro storico becomes one big piazza. There’s no real off-season in the Eternal City.

It is located just 30 miles from the Mediterranean Sea, so it’s no surprise that it has a classic Mediterranean climate. For those who like warmth and sun, the drawback of this weather pattern is a rainy, cool winter season. The upside, however, is a sunny, bone-dry summer that’s conducive to outdoor plans.

One of the world’s great private art collections, including Titian’s Sacred and Profane Love, a gaggle of Caravaggios and Bernini’s sublime sculpture Apollo and Daphne, is housed in the villa. But the large landscaped gardens are just as appealing, especially in summer. See www.galleriaborghese.it.

Every great day must come to an end, but you don’t have to call it quits when the sun goes down. At night, visit the bustling district of Trastevere. With its winding, cobbled streets and stately walls, this neighborhood appears frozen in time. After a relaxing dinner at one of its many restaurants, visit a wine bar or disco for a taste of true Roman nightlife.

This ancient Roman consular road has for more than 2,000 years has been Rome’s Hampstead, housing the country-in-the-city mansions of the rich and famous. It is lined with numerous pagan and Christian sites and underground catacombs. Consider hiring a bicycle. See www.parcoappiaantica.it/en

You’d be foolish not to explore Rome’s key ancient sights, even in the heat of summer. Come armed with a plan of how it all used to look (buy one at the visitor centre in Via dei Fori Imperiali) to make sense of the majestic ruins of Rome’s power centre and, on the Palatine hill, its upmarket residential district. Sign up for the guided tour of the Casa di Augusto, the early emperor’s surprisingly modest and intimate private house with vibrant frescoes. Tickets cost €12 (£10), including entry to the Colosseum.

The “Roman Summer” is the umbrella term for the citywide programme of open-air concerts, dance and theatre performances, cinema screenings and other events that animate Rome through the hotter months. Highlights include the Isola del Cinema film festival on the Tiber Island.

If you want to go on vacation farmhouse near  Rome with your family or friends choose Agrimerlano! We have apartments ideal for families with children, apartments for groups of friends up to 11 beds. Click HERE to see our apartments – Booking for 3 nights with 5% discount – Booking[….]

Compliance with the anti-Covid-19 rules in our farmhouse We and all the staff of Tenuta Merlano have taken care of the sanitation of the entire structure, we have been trained and updated so that we can best meet your every need during your holiday on our farm, in compliance with[….]

Do you have any questions? Contact us for further information. We are happy to offer you a custom quote.
info @ agrimerlano.it
+39 06 90 11 24 31
+39 335 69 90 543
Come and visit the ancient farmhouses of Merlano Agritourism. Experience the ambience and the warm welcome for our guests.
Informativa sui cookie Informativa ai sensi dell’art. 13 D.LGS. 30 giugno 2003 n.196 https://agrimerlano.com/ utilizza i cookie per migliorare la tua esperienza di navigazione.Ho capito!Leggi di più